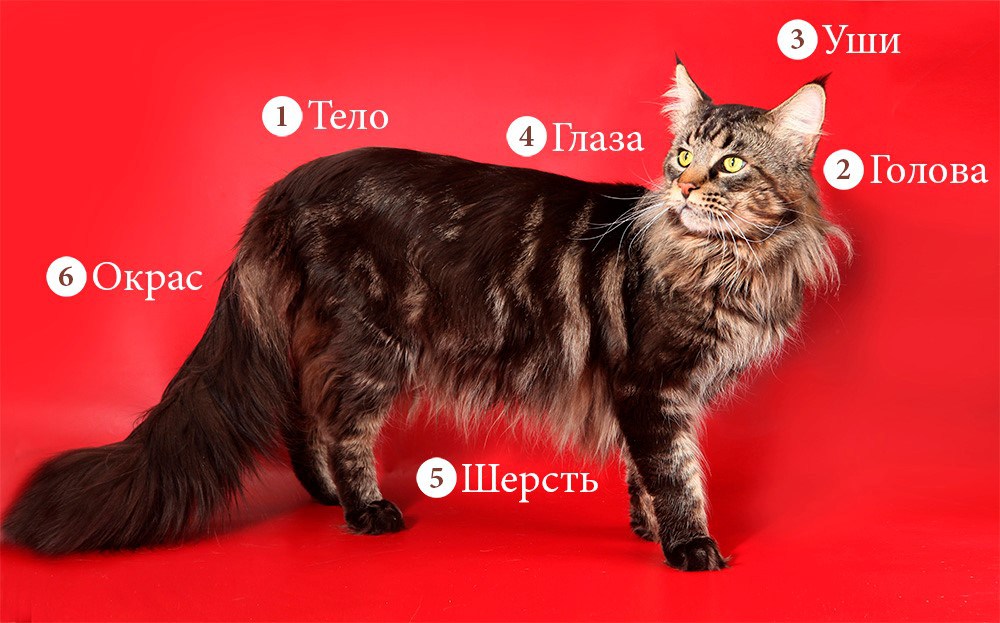 From large to very large, muscular, long and wide, creates the impression of rectangularity. Neck of medium length with strong musculature; wide chest. Paws strong, medium length; pads paws with tufts of wool between the toes. The tail should at least reach the shoulder, broad at the base and tapering to the tip, with long flowing hair.

Large massive skull, squared outwardly and with straight contours; cheekbones high, nose of medium length; The "box" is massive and square, with a noticeable transition to the forehead. The massive chin is flush with the upper jaw and nose. Curved profile.

Very large, high set ears, broad at the base and tapering to the top. To put almost vertical and high, the distance between the ears should be no more than the width of the ear at its base. Ear circumference extends beyond its outer edge. On the tips of the ears are desirable brushes.

Large, oval, located far apart, slightly obliquely planted; the color of the eye should be uniform and harmonize with the overall color.

In short, on the head and shoulders, except the mane; noticeably extending to the back of the body, stomach and "pants". The dense undercoat, soft and gentle, is covered by a coarser outer cover. Dense, smoothly fitting to the body pubescence is waterproof, completely covers the back of the body, paws and the upper side of the tail. The abdomen and "pants" have only an undercoat. A lush mane is desirable, but not necessary.

Colors of chocolate and cinnamon and, accordingly, their clarified variations (lilac and faun) are not accepted in any combinations (bicolors, tricolors, tabby). In addition, all types of point colors are prohibited. Any other colors are allowed and named in the General Color Guide.

The same length of wool throughout the body - a significant drawback, which even with a fine structure prohibits the title of CAC. 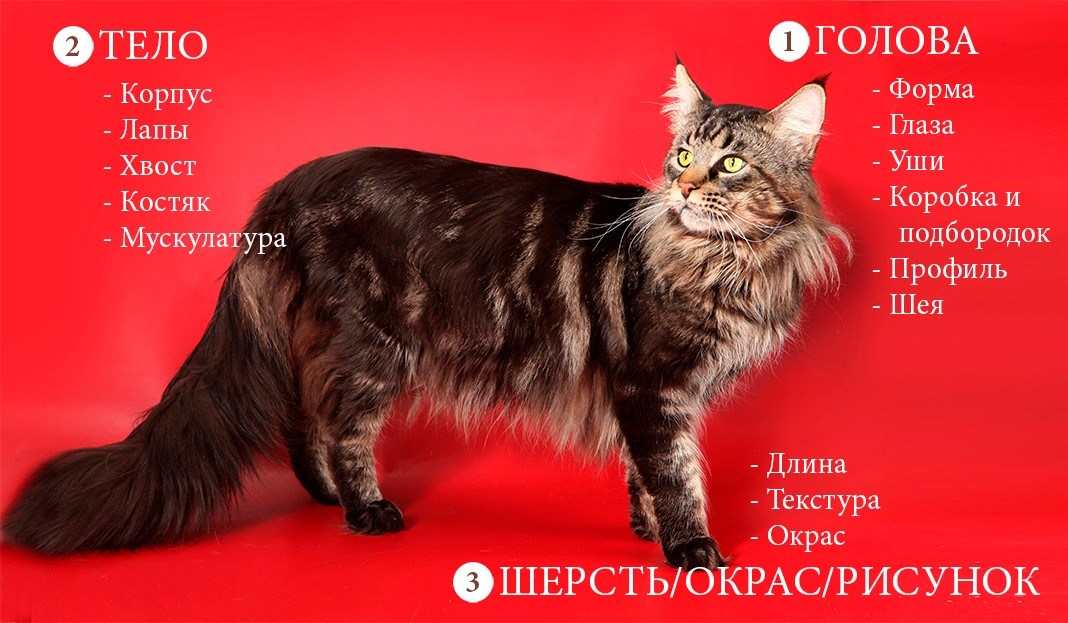 The form. Wide, modified wedge, of medium size with a strongly rounded forehead and high convex cheekbones. Under the cheekbones should be felt a clear stop.

Eyes. Large, slightly oval, looking almost round when wide open. Widely delivered. Are slightly obliquely in relation to the outer edge of the ear. Color is any shade of green and / or gold, blue or disagreeable for white animals. There are no family relations between the color of the coat and the color of the eyes.

Ears. Large, tall, wide at the base. In relation to the head, a high and slightly outward inclined position is set. The distance between the ears should not be greater. Than the width of the base of the ear. The lower base is slightly further back than the upper one. Moderately pointed. Lynx brushes upright from the back of the ear. Ear pitting continues horizontally outside the outer border of the ear.

Chin. Straight, in line with the nose and upper lip.

Profile. A gentle concave slope. A certain bulge is allowed at the end.

Paws. Medium proportions in relation to the body with strong bones and musculature.

Feet. Large, roundish, with tufts of hair between the toes.

Tail. Wide at the base and pointed toward the tip, beautifully pubescent, with flowing hair, no less than the length of the body to the base of the tail.

Length. Uneven, shorter on the shoulders, gradually extending to the stomach and "pants". In front there is a long collar-mane around the neck, the stomach and pants are very shaggy. A full collar is not necessary, but it is desirable that it start from the base of the ears.

Texture. All-weather wool. The wool tightly adjoins the body, smoothly falling along the body. There is a light undercoat, but not cotton or wool-like.

Color. Traditional categories, all divisions, all colors. A white outline around the eyes, lips and chin is permissible, except for solid colors.

Cats are proportionally smaller than cats and can weigh 2-3 kg less. There must necessarily be an assumption for this significant difference in size. Adult cats can have larger and broader heads than cats.

Sharply expressed whiskers. Outstanding chin. Failure or strong bulge at the end of the nose. Insufficient number of undercoat. Uniform cracks, medallions or spots. Straight profile. Widely placed or collapsed ears. Long, thin legs. Deeply almond-shaped eyes. Flat edge of the upper eyelid, when the eye is wide open. Not enough "shaggy" belly. Short tail. Round head. The wool is the same length throughout the body. Short, stocky body. Light bones. Small size of the animal as a whole.

The Maine Coon standards according to the FIFe rules

The constitution of cats and cats of this breed is large, a head with a square line and large ears. The neck of cats and cats breed Maine Coon muscular and strong. The body of cats and cats is rectangular muscular, strong and long with a broad thorax, the skeleton is massive, the tail is long streaming. The sensation of strength and power creates density and a good muscle tone.

The shape of the head of cats and Maine Coon cats is of medium size with square lines, a profile with a slightly concave transition and a softly rounded forehead. Cheeks are convex and high. The muzzle has a square line, with a nose and a face of medium length. Between the muzzle and cheekbones there must be a correct and precise transition. On the vertical line of the upper lip and nose is a strong chin.

On the muzzle are widely placed large, slightly oval eyes, when they are wide open, they seem round. The eyes are slightly inclined. Maine Coon's eyes can have any color. There is no relationship between the color of the coat and the eyes. It is desirable if the eye color is clear.

Wide at the base, large, slightly pointed with yellowish tassels. The outer edge of the Maine Coon's ears is the tufts of wool that are in the ears. Ears are located high on their head with a slight inclination to the outside. The distance that should be between the ears corresponds to the width of one ear. With age, between the ears the distance increases slightly.

The legs of cats and cats of this breed are of average length, very strong, together with the body they form a rectangle. Paws rounded, large, between the fingers there are tufts of wool.

The tail is equal to the length of their body - from the blades to the base of its tail. At the base of the tail it is wide, which narrows to its tip. On the tail, the wool is flowing and long.

The structure of Maine Coon wool is "all-weather", thick. On the head, shoulders and feet, the hair is short, which gradually lengthens to the bottom of the back and sides, with a fluffy belly and baggy, long and shaggy pants on the hind legs. There may also be a collar. Maine Coon's wool has a silky texture. Their undercoat is thin and soft, which is covered with smooth and coarse wool.

Maine Coon coloring can be of all color variations, with white color all variations of pictures are included. Such drawings as purple, chocolate, faun, point and cinnamon are excluded. The amount of white can be any - it's a white medallion, a white asterisk, a white collar, white on the abdomen, white on the legs, etc.